There’s something warm and comforting about the tantalizing aroma of freshly baked cinnamon rolls, dripping with icing.

Cinnamon, vanilla, and sugar all swirl in the air with hints of buttery goodness.

But when you care about your health, you can’t help but think of all the things that make cinnamon rolls seem so forbidden: lots of white flour, heaps of white sugar, and maybe even a dash of processed fats to finish it off.

But I have good news. You don’t have to swear off cinnamon rolls or only enjoy them when you’re willing to go on a little guilt trip after.

These homemade cinnamon rolls will give you the light, fluffy texture and sweet cinnamon flavor you want in a cinnamon roll, but nicely balanced with healthy whole wheat and leavened with sourdough.

Best of all? They’re relatively simple to make. Follow my step-by-step instructions and photos and you’ll be able to enjoy a batch in no time.

How to Make Cinnamon Rolls Healthier

To be sure, cinnamon rolls are a sweet treat. Period. They’re never going to compete with kale and they’ll always to one of those “sometimes” foods you indulge in once in a while.

But there are a few simple ways to take a sugary cinnamon roll recipe and make it a little more reasonable. Not exactly healthy, per se, but healthier. And this recipe does just that.

And in case you’re worried, no, sourdough won’t make your cinnamon rolls taste too sour. Instead, it’ll leave you with a flavorful dough that has a delightful, slight tang and incredible texture.

For the best results, start your whole wheat sourdough cinnamon rolls the evening before you want to serve them. That gives your dough plenty of time to rise and ferment with the sourdough starter so you end up with light, fluffy cinnamon rolls.

I’ve got detailed instructions and photos for you next, including tips on how I use the incredible Brod and Taylor Bread Proofer to get perfect results every time. But if you’re a sourdough baking pro, you can scroll all the way down for a printable recipe card.

Disclosure: Affiliate links are included. If you purchase through these links, your cost is the same while I can earn a commission.

Start your cinnamon roll dough at least 12 hours before you plan to serve the rolls. That means if you’re making them for the morning, start them the evening before.

In a stand mixer with the dough hook or attachment, combine 2 cups of the flour with the other ingredients until smooth. Add additional flour, 1/4 cup at a time, until you have a smooth, soft dough that clings to the dough hook. You can also mix the dough by hand.

Cover the dough and allow to rise overnight (or 8-10 hours), either in the mixing bowl or a different bowl. 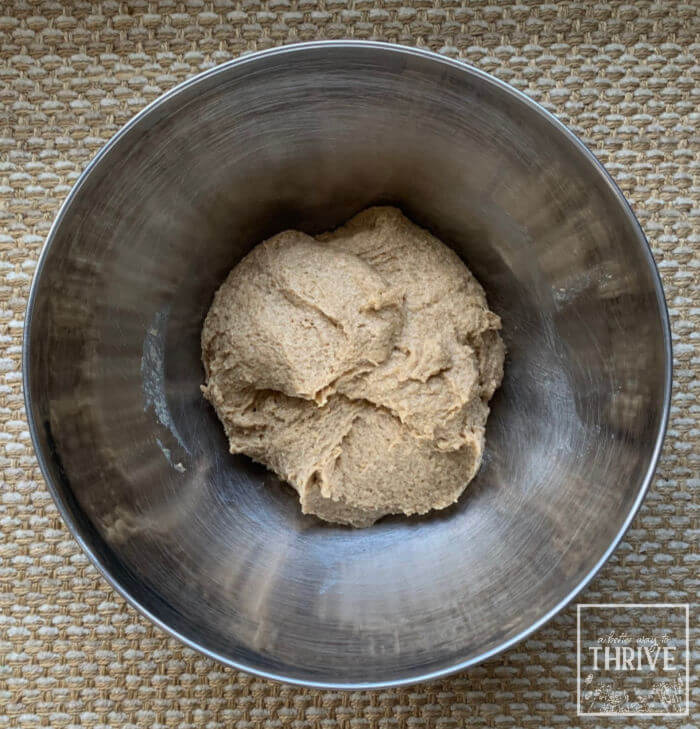 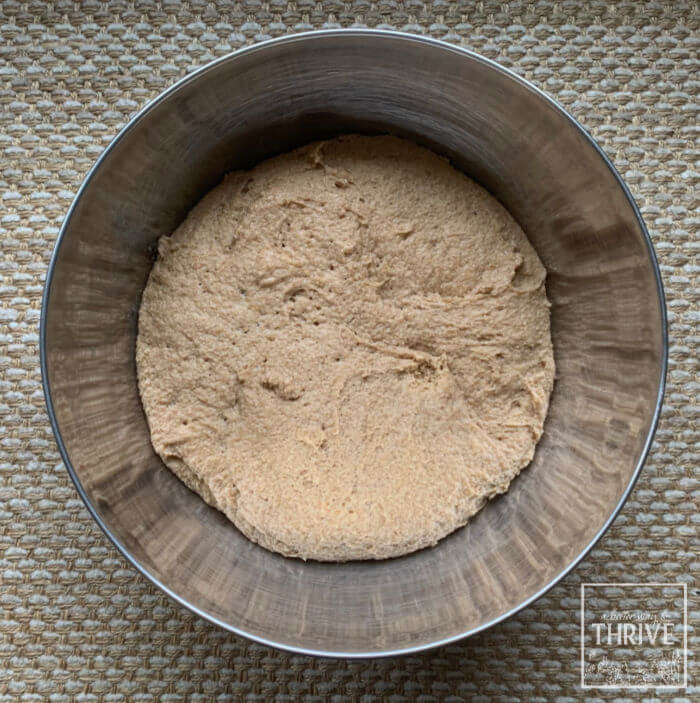 In the morning, punch down the dough. If possible, chill it in the refrigerator for 1-2 hours so it will roll out easily. If time is limited, skip chilling and proceed to rolling it out.

On a clean surface, gently roll out the dough with a rolling pin, only using flour if necessary to prevent sticking. Continue rolling and stretching to form a rectangle around 12 inches long and 10 inches wide.

In a small bowl, mix together the filling ingredients with a fork until thoroughly combined. Spread the filling evenly over the rolled dough. 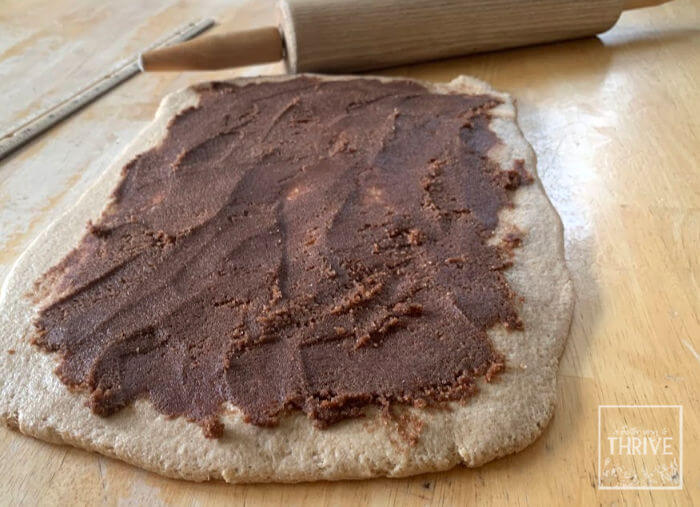 Starting on one long side, roll the dough up jellyroll style. Once it’s completely rolled up, gently pinch the long edge of the dough to seal it.

Place the cinnamon rolls in a well-buttered 9-inch pie pan to rise one final time before baking.

At this point, I put the cinnamon rolls in my bread proofer to get the perfect rise before they go in the oven. This is an optional tool, but it gives incredible results! It keeps the dough at just the right temperature and humidity for rising well and folds up completely for easy storage. 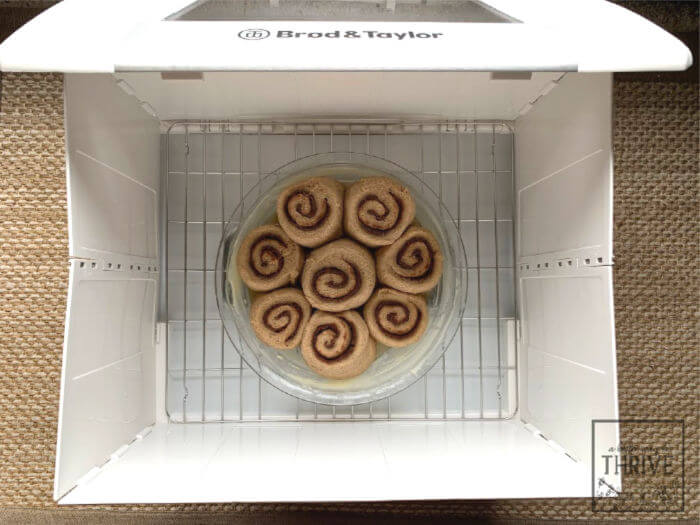 You can find the Brod and Taylor Bread Proofer at Pleasant Hill Grain. They carry an incredible collection of high-quality tools for your whole foods kitchen that are meant to last a lifetime.

Once the cinnamon rolls have risen, preheat the oven to 350*F/190*C, then bake for 30-35 minutes (until the rolls are lightly browned and the filling starts to bubble).

Remove the cinnamon rolls from the oven and allow to cool for 10 minutes on a wire rack in the pan while you mix up the frosting.

For the frosting, beat together the cream cheese, vanilla extract, and honey with a fork in a small bowl until smooth and thoroughly combined. Spoon around 1 tablespoon of the frosting over each cinnamon roll, then spread evenly over the rolls.

This recipe makes the perfect-sized batch for my family, allowing us to all enjoy one delectable cinnamon roll and not leaving any leftover to tempt us.

But there are times when you need a giant batch of cinnamon rolls. Maybe it’s Christmas. Maybe you’re serving them for a party. Or maybe you just know that one cinnamon roll is never enough.

Whatever the case may be, you can double this recipe and use a 9×13″ pan for baking.

Along with doubling the recipe, there are a few other things you can do to tweak the recipe.

We enjoy these cinnamon rolls every year on Christmas morning. It’s one of our favorite seasonal traditions.

And now with this recipe at your fingertips, you can enjoy them with your family, too, knowing you’re giving them something a little better for their bodies.

For additional flavor options, try one or two of the following:

This recipe can be doubled and baked in a 9x13" dish.

What’s your favorite part of a good cinnamon roll?

Pleasant Hill Grain provided me with a Brod and Taylor Bread Proofer and store credit for this post. The opinions, information, and recipe in the post are strictly mine.