I remember brushing the 3 inch long sections of hair out of my eyes, wondering at first if new hair growth was coming in postpartum. Except I knew that the timing was off.

I had noticed that the texture of my hair had changed from silky soft and easy to brush to something much more tangled, and it made a strange straw-like sound when the strands rubbed together while styling. Or had it always done that?

I had read some scathing articles online about how awful the baking soda no ‘poo haircare routine could be on hair, but I refused to believe them. It had worked so well for me for two whole years. How could it suddenly ruin my long, healthy hair?

It did. And this is my awful baking soda no ‘poo before and after story.

The No ‘Poo Method and Why I Loved It

If you aren’t already familiar with the term, “no ‘poo” simply refers to any method of washing the hair that doesn’t use conventional shampoo and conditioner (think “no {sham}poo”). Often, when someone refers to no ‘poo, they are talking about washing the hair with a baking soda and water solution, then conditioning with an apple cider vinegar rinse.

I learned about the method from a blog I used to follow, and since the blogger spoke so highly of it and had been using it for a couple of months, I thought it was safe enough to try.

That’s not to say I didn’t feel a little hesitation, though. My hair was really, really healthy, and I didn’t want to do anything that might damage it. I took excellent care of my hair. Though it was extremely long (almost to my knees) and hadn’t been cut in around 10 years (because of personal convictions), I didn’t have split ends. It had never been colored or permed, and I rarely used heat to style it.

I babied my hair.

Despite my slight hesitation, I was so intrigued by the possibility of having a simple, inexpensive, and nontoxic DIY way to wash my hair. The whole idea of no ‘poo haircare really appealed to my burgeoning natural tendencies.

There were no funny ingredients to worry about and other ladies reported washing their hair less often. With only great reviews to be found, I decided to dive in and try it.

I was able to stretch my washes out to every other day for the first time since junior high. Then it was every three days, and finally every four. My hair wasn’t flat, limp, or weighed down anymore, and it felt really clean and free. It was easy to style, it looked healthy, and it felt great.

I had found the secret to healthy, natural hair for cheap. Or so I thought. 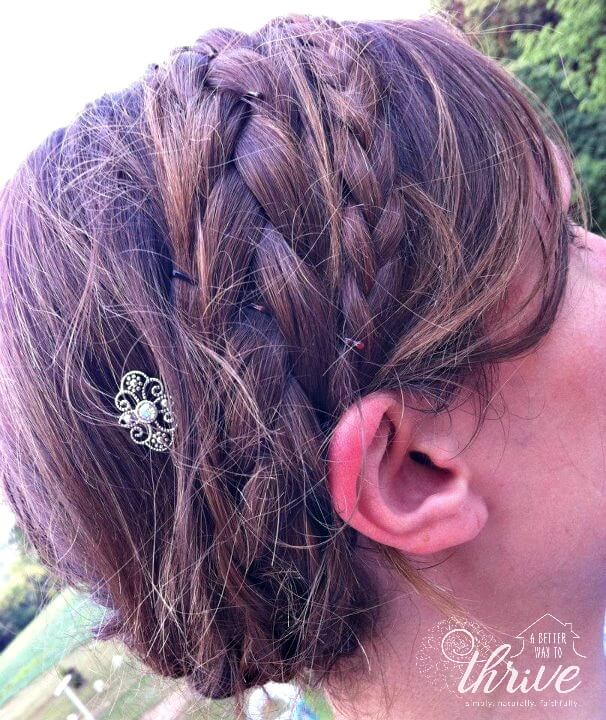 I cringe when I see this picture now. There was so much breakage happening here!

When Others Jumped Off the Bandwagon

About two years or so into no ‘poo-ing, I started reading a few things here and there about baking soda being rather hard on the hair. Ladies were saying they tried it and felt that it dried their hair out and made it brittle.

I’d love to say that I took their words to heart and began researching the effects of baking soda on hair more extensively. But I didn’t.

I told myself that these ladies were just doing no ‘poo the wrong way, like using too much baking soda, washing too frequently, and not doing occasional oil treatments like I did. Or maybe their hair tended to by dry anyhow and so they just weren’t a good fit for that kind of hair washing routine. Or perhaps they had some sort of nutritional deficiency that gave them brittle hair. Clearly, it couldn’t be my beloved baking soda wash routine.

So I continued on with no ‘poo, but a nagging, quiet worry took root in the back of my mind.

And Then The Breakage Began

Like I mentioned, when I started to notice those short sections of hair along the very top of my head, I wanted to believe it was new hair growth. I couldn’t imagine that what had once worked so marvelously for me and what I had enthusiastically shared with so many other people could suddenly cause disastrous breakage.

But that quiet, nagging worry started to grow louder. There didn’t seem to be any other reasonable explanation.

My baby was 8 months old, so I was past the postpartum hair-thinning and regrowth phase. My whole foods diet and average stress levels had stayed the same. I didn’t have dry skin or brittle nails, symptoms that would point to an internal problem.

And then I read about other people who had the same terrible experience I was having, all because of washing their hair with baking soda. I read this woman’s experience, and this explanation from a dermatologist. Note: I don’t care for the dermatologist’s tone, some of her points, or her product recommendations. But her explanation on the chemistry of no ‘poo is really helpful.

I started to wonder what might happen if I tried a shampoo bar instead of washing with baking soda. My hair was feeling a little dry, and I wondered if a new wash routine might help its texture. And that’s when the severity of the damage really became clear.

When I tried a shampoo bar, I thought my hair was just a little dry. In reality, it was terribly dry and brittle, but the change in texture happened so gradually over time that I hadn’t really noticed how awful it had become.

Within one wash with a shampoo bar I noticed a difference. Suddenly my hair started to feel like it did before no ‘poo came along. After more time off the no ‘poo routine, it became softer again and didn’t have the coarse, straw-like feel that had developed with baking soda. It also didn’t knot and tangle so easily.

I decided that I was done with baking soda no ‘poo for good. But though the texture of my hair started to improve greatly, the breakage continued. Too much damage had already been done.

For almost two whole years, all of the hair that had been damaged by no ‘poo slowly broke off, from the top layer of my hair all the way down to the hair that grows at the nape of my neck.

It was heartbreaking and awful. My once long, healthy hair became much shorter, broken, and frayed at the ends.

Could No ‘Poo Work for Some?

Is it possible that occasionally washing with baking soda could work for long-term haircare? Sure, it’s possible, I suppose. Maybe using baking soda every few months would work for cleaning and clarifying without doing much damage.

I don’t know. And because I don’t know, I won’t recommend it or suggest it. Some things carry too much of a risk to even bother trying.

You see, the problem with washing with baking soda isn’t just that it’s abrasive and drying. It’s extremely alkaline. Shampoos are usually pH balanced to be slightly acidic like your scalp is. This keeps the hair shaft healthy, smooth, and closed.

What I later learned is that highly alkaline baking soda, no matter how much you dilute it in water, opens the hair shaft. Over time and repeated use, it causes the hair to become porous, brittle, and eventually break. There aren’t any oil treatments, dietary supplements, or vinegar rinses that remove the pH problem.

In fact, though the acidic vinegar rinse shocks the hair back into a more pH-balanced state, it also puts the hair through a harsh process similar to chemically coloring it every time you wash with baking soda (highly alkaline) and rinse with ACV (highly acidic). Not exactly a process to put your hair through regularly.

Oh, and shampoo bars, homemade castile soap shampoos, and many other DIY or natural haircare methods have the same pH problems as baking soda. They aren’t a great longterm solution, either. I used a shampoo bar for maybe 6 months after quitting no ‘poo but was never thrilled with it.

One thing that’s become really important to me now as an herbalist is that you should never use your family (or yourself, for that matter) as guinea pigs for home remedies and natural living adventures. You need to know what you’re doing, why you’re doing it, and what to expect. I had to learn that the hard way through this awful experience.

Sadly, my time doing no ‘poo ended up being a natural living experiment that yielded devastating results. It was so disheartening to watch my hair continually break off, month after month after month.

Even more than that, all I could do was cringe when I thought about all the people I previously encouraged to wash their hair this way. Though it was a painful lesson, it taught me to be skeptical of natural living fads and to look for solid evidence before recommending any natural living alternatives.

Because the evidence isn’t on the side of baking soda no ‘poo. I and so many others who experienced the same kind of damage can attest to that.

And while I was never able to undo the havoc that baking soda no ‘poo wreaked on my long, healthy hair, with time and quality hair care products, my hair has recovered. You can read all about that here.

Do you have a no ‘poo story? Please share in the comments below!